Shayaan’s Story: A Real Life Tale of Dried Cabbage and a Rescue Horse Who Recovered from GI Ulcers 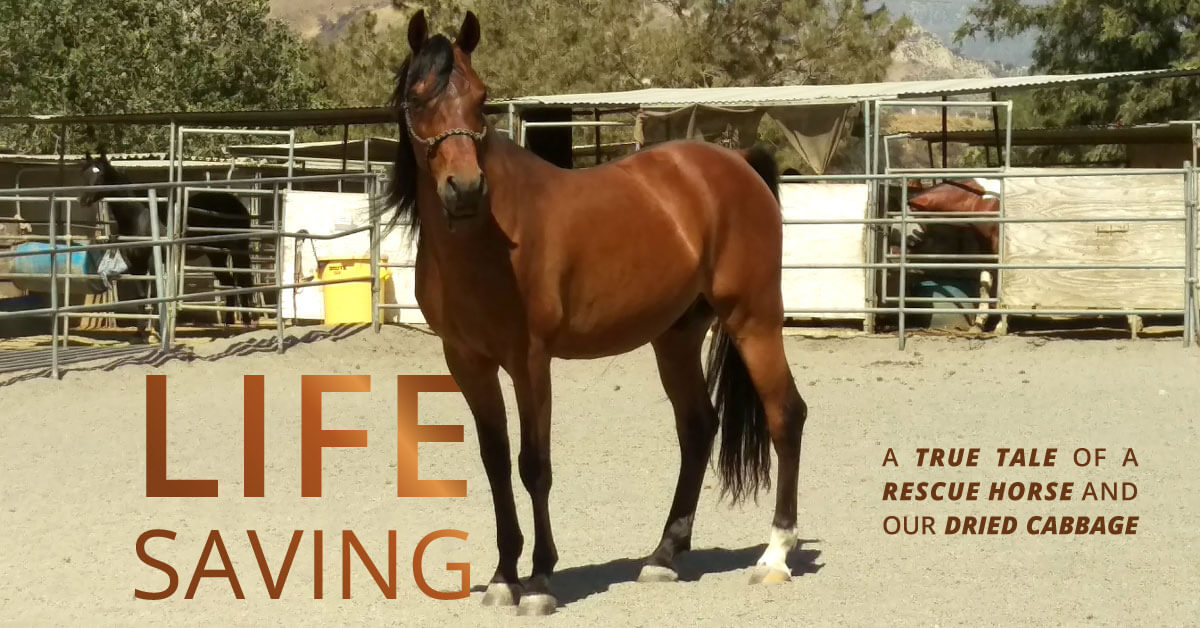 Over the years, horse owners have shared with us that our dried cabbage helped their horses recover from ulcers. We recently heard one such story that really touched our hearts:

A quick note to tell you how much I love your dehydrated cabbage. I nibble on it, but I use it daily in my horse's bucket. As a wonderful result, he no longer has ulcers. You saved his life and I just placed my third order. He received 2 oz daily.

So we called Barbara to hear more of her horse’s story. She told us that his name is Shayaan and she rescued him five years ago. He is an Arabian and his name comes from an Arabic word that means intelligence. This poor horse was endangered and in very poor health when Barbara adopted him. “He was three days away from being shipped to Mexico for dog meat,” she told us. But when Barbara first laid eyes on him, she was instantly committed to saving Shayaan’s life and helping him become healthy. “He was a wreck. Missing 350 lbs. Looked like hell, but all I could see was the horse he could be, which was a stunning beautiful horse.”

Not only was Shayaan malnourished, but he was also prone to ulcers, colic, and other issues. “It is very easy to tell if a horse has ulcers, you just have to run your hand on the flanks and the horse practically shivers. They have a very strong reaction,” she said.

Her first response was to go to her veterinarian, who put Shayaan on medication. “I was giving him 30 pills a day” she said, but “he wasn’t getting better.” The symptoms would improve for a while, but he kept getting ill. Barbara told us the “final straw” came when Shayaan had colic three times in 36 hours. “I looked at him and said, we are not doing this anymore!” And that is when Barbara “went on the path of war” looking for a holistic solution.

Barbara was already comfortable researching animal nutrition because she works with koi (the Japanese Carp) professionally. “I do a lot of research in food for the fish,” she told us, “I am always asking questions. Is this good for this? Is it good for that?” She has seen amazing results in her fish. “My animals have very unique diets and they live for a very long time” she said. “Some of my fish have been with me since 1980!”

So to help Shayaan get better, she began researching the connection between horse nutrition and GI ulcers. When Barbara began to find stories about the benefits of dried cabbage she was intrigued. During her research she ran across our interview with BioStar Founder and Formulator Tigger Montague in our blog on Dried Cabbage for GI Ulcers in Horses. BioStar is a leading producer of whole food supplements for horses and dogs. They use our dried cabbage in their Tum-Ease EQ supplement, which was formulated to support GI health in ulcer-prone horses. Barbara told us that reading that interview gave her the courage to try feeding cabbage to Shayaan. Soon after, she began adding dehydrated cabbage to Shayaan’s feeding bucket. That, she said, “changed everything!”

Shayaan is now ulcer free and completely off all ulcer medications. She told us that she has also seen a lot of other great benefits to the cabbage. “I have seen a complete change. He is a much happier horse.”

Barbara believes that adding dehydrated cabbage was one of several factors that helped Shayaan get healthy. “Of course it is never just one thing,” she said. “It is a combination. You have to have a base of good food to start with and your horse has to be exercised and out… Every element works together.”

Together, the combination of all of Barbara’s efforts has made a huge difference in improving Shayaan’s health and quality of life. “I have a horse that is shiny and happy,” she said. She believes that “the cabbage has made all the difference in the world!” In fact, Barbara was so impressed with Shayaan’s improvements that when she recently adopted a second horse, named Cleo. She immediately started feeding Cleo dried cabbage too. Barbara’s horses are certainly lucky to have her looking out for their health and well being. She told us, “My job is to keep them healthy and give them absolutely the best I can give them.”

Here at Harmony House, we are honored that our dehydrated cabbage is part of the high quality regimen of care that Barbara offers her horses and we are extremely grateful that Barbara took the time to share Shayaan’s story with us.

Get Newsletter Deals!Sign up for offers, new products, and recipes.
Ooop! The email you entered isn't valid.
WooHoo! You subscribed successfully.
Ok! You're unsubscribed.