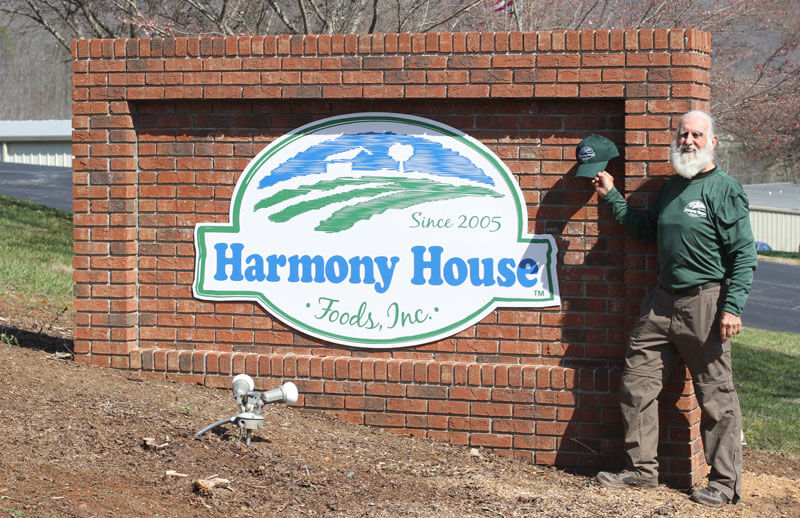 Dale Sanders, better known as Grey Beard, is well on his way to becoming the oldest person ever to thru-hike the Appalachian Trail (he’ll be 82 when he finishes the trail in September or October). Harmony House Foods is proud to be sponsoring Dale on his trip and we invited him to visit us at our headquarters in Franklin, North Carolina, when he passed through on the AT.

On Thursday, March 23, we picked Dale up at Winding Stair Gap and brought him to tour our facility and snack on some of our delicious freeze dried pineapple. While he was here, Dale graciously took questions from members of our local Nantahala Hiking Club, an Appalachian Trail Conservancy member group that maintains 58.6 miles of the AT, between Bly Gap at the Georgia/North Carolina border to the Nantahala Outdoor Center on the Nantahala River at Wesser, NC. Here are some of the questions that club members asked Dale about his trek, and Dale’s answers.

Are you hiking alone?

I am definitely hiking alone. I really want to go alone. It is so difficult to find someone that has the same hiking skills so you can stay together. I learned that while paddling the Mississippi River. When you are paddling or hiking with someone with a different skill level, it just doesn’t work.

How much does your pack weigh?

Right now it is heavy because I’ve got a lot of winter stuff in there, clothing, etc. So my pack when I left Neels Gap weighed 25 ½ lbs. In the summer I am thinking it is going to be around 20. I just can’t get it to ultralight, which would be under 20 lbs.

How many days of food do you normally carry?

When canoeing I try to carry a week’s supply. On the Mississippi River, especially the lower half, you may have to wait 8 or 10 days before you come to a place to buy food. It is really isolated. Here I probably won’t be carrying more than 5 days of food at any one time. I am pretty sure even going through the 100 Mile Wilderness that I might have to take six days worth.

Will you tell us about hiking in the cold last week, during the freeze?

I don’t know why, but when I grew up in Kentucky I just never liked winters. I just don’t like the cold. My hands go numb. Even my ears get cold! (During the cold snap) I couldn’t even sign the log because my fingers couldn’t hold the pen—my fingers are still cold. Tuesday night of last week, 11 miles out of Neels Gap, we went to the first shelter and naturally it was full. It was six o’clock in the evening. I knew I needed to put up a tent near the shelter there. There was a little camping area right before that shelter, we found as level an area as we could find. I don’t know how I got the tent up because was having to hold the poles with my whole hand. I didn’t eat very much that night. I hardly ate any dinner at all. As soon as I got the tent up, I got in my sleeping bag to get warm. I tried to drink water and it was frozen. So I didn’t have much food, didn’t have much water. The water froze, even in my sleeping bag. I didn’t feel well that whole day because I hadn’t prepared for it. I didn’t have enough of anything in me, not only carbs and calories, but water or anything. That night was a pretty tough night.

Have you met any older women who are hiking the trail?

I have been surprised at the number of older women and men on the trail this year. And when I say older I mean middle aged on up. When I hiked sections several years ago, there were not that many older people. I think the demographics are changing to older.

When I grow up I want to be like you!

When was the last record set (for oldest person to thru-hike the AT)?

It was 2001, Lee Barry. Others have tried it since then, but nobody’s made it. Now I wouldn’t swear that somebody 82 hadn’t done it, but the Appalachian Trail Conservancy doesn’t know about them. I’ll turn 82 in June, so if someone else 81 is doing it right now, we are going to have to look at when their birthday is (laughs).

Are you using a tent or staying in shelters, or a combination?

I am sleeping primarily in the tent. I stayed in a shelter last night for the first time on this trip at Rock Gap. Simply because there was space and I didn’t want to have to pack the tent up this morning. But typically I put the tent up. I prefer the tent. If it going to be raining though, I’ll take a shelter.

Are you going to trim your beard before you get to Katahdin?

I sort of wanted to shave my head and the beard before I started (laughs)! I doubt if I’ll do that.

What will be your next trip or adventure?

I’m probably going to take some time off. I want to do some short things some fun things. But the following year if I am still healthy enough I am going to try to do the Pacific Crest Trail. Or I’m going to paddle the Missouri River from its source up by Yellowstone to the Gulf of Mexico. That is 3,700 miles. One of those two things or something similar. I want to write a book about life after 80. So I’ve go to put a little more drama in there somewhere. I don’t know what to do for the drama part. I want to keep it relatively honest (laughs).

Read our last post on Grey Beard: Harmony House Interviews Dale Sanders: The Backpacker Seeking to Become the Oldest Person to Ever Thru-hike the Appalachian Trail

Rex Hodge of WLOS came out and interviewed Dale while he was at Harmony House! Watch his interview below:

Get Newsletter Deals!Sign up for offers, new products, and recipes.
Ooop! The email you entered isn't valid.
WooHoo! You subscribed successfully.
Ok! You're unsubscribed.